How to grow your startup from zero users to  million users, in just 6 months?

That’s the question I’m regularly asked at startup events when they hear about the success we’ve had with I Am Playr (the social game I worked with), 8 months months after we launched.

This is the story of how we grew I Am Playr, the first game for our social gaming startup to over 4 million users in just over 6 months. I’ve picked out the 6 most impactful things that got us there:

Before I get started, some caveats:

• 4 million users is really a vanity metric. Yes, it’s true – we’ve had four million users play our game – but that’s actually easy to do (if you have deep pockets), what’s harder is to keep those users engaged and coming back day after day (and month after month). That’s why the standard industry standard metric is Monthly Active User (MAU) – we have 1.3 million of these now playing on ave 48 minutes a day, which is still pretty damn good. More on vanity and non-vanity metrics here

• These user numbers may sound huge to you, and to a certain degree they are large, but we are still a tiny player in the social gaming industry. Companies like Zynga alone have over 292 million monthly active users (and Drawsomething famously added 50 million users in 50 days) – so although we’re proud of what we’ve achieved, we’re very aware we’ve a long way, and a few more zeros, before Mark Zuckenberg is posting about us on his Facebook wall

• I write this from the perspective of Marketing Manager for I Am Playr – so most of what I’ll I write about will be marketing focused, however – the growth could not have been achieved if the game production team did not develop (and continue to develop) such a genuinely amazing game

Before I started working with I Am Playr, viral marketing was one of those buzz words that I often heard talked about but rarely saw in action. However, like all good social games (and social startups) – we now have lots of viral marketing mechanics to help us grow our users.

Technical note: Before I start telling you about vital marketing, I first want to tell you what viral marketing is not: Word of Mouth. Yes Word of Mouth can spread like a virus, Malcolm Gladwell tells the story of how Hushpuppies did that very thing in his book The Tipping Point, but that’s not a viral mechanic per se.

Virality (measured as ‘k’ factor) is defined as a action by a user which directly brings in another user to the game. This should be trackable path of clicks to prove where each viral user came from.

We have a number of these viral mechanics in I Am Playr – ranging from sharing achievements on your Facebook timeline to rewarding you for having more players in the game with you. An example of this is here.

A few months after launch we introduced a viral mechanic that rewarded users for inviting friends to the game. It looked like this: 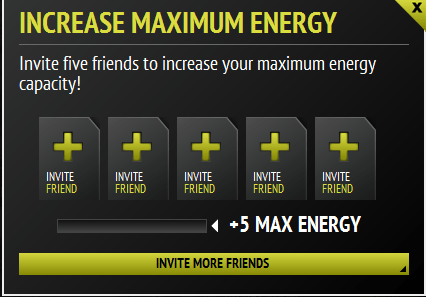 Here was the impact: 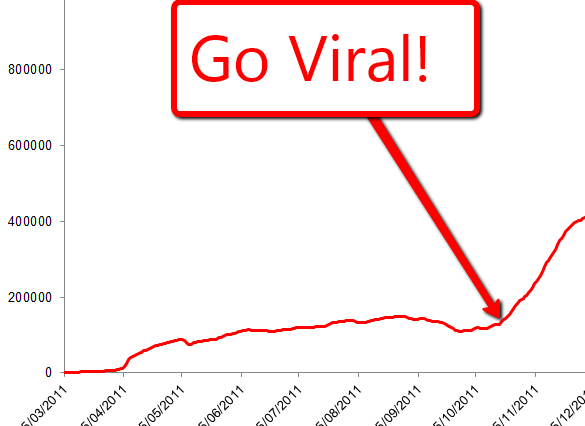 Having a budget to give your startup an initial boost of users can be vital. Much like a rocket trying to leave the earth’s atmosphere – it can give you the user base you need for other, self perpetuating marketing channels (such as viral marketing, media partnerships etc) to kick in.

But what do you do with it?

When I started working in Marketing about 10 years ago – we would spend tens of thousands of dollars on above the line advertising that we would never really know if it worked or not.

How times have changed.

If you’re a web business you have to be great at pay per click advertising (biggest of these are Facebook ads, Google PPC or Bing PPC) simply because you can guarantee huge number of users. You want to be able to buy them in the most cost effective manner possible – ideally users that spend more money with you than you spent to acquire them. This is called positive return on investment.

Most direct response digial advertising is based on a Cost Per Click (CPC) basis – well you should take more note of the Cost per Acquisition (CPA), which is far more important. This tells you how much it costs to acquire a real user (i.e. they register with you in some way) – vs someone who clicks an ad and hits the ‘back button’ before you can say ‘not interested’

The most effective form of online advertising will vary, depending what you product is and where it is found on the web. For us, Facebook ads work the best, for two reasons:

First: Users play our game on Facebook – so when they click on our Facebook ads, they are already signed in – which reduces friction in the user conversion funnel. Compare this against if someone sees a Google PPC ad, clicks it and see’s the ‘sign into Facebook’ page = massive drop off in users

Second: Facebook ads allow us to target users using both their demographics and psycho-graphic profiles. This gives us the opportunity to target users who are most likely to spend money in our game (we track user type behaviour once they get into our game).

An example of this is, that we know that – a 28 year old Norwegian Male (demographic) who supports Barcelona and likes to play social games (psychographic) will be very likely to spend high amounts of revenue in our game.

Takeaway: Have a marketing budget to give you a base level of users to make things interesting. Then get really good a PPC based online marketing

Might sound like I’m stating the obvious when I say that the web is global. But I don’t think you can truly appreciate how global it is, until you’re dealing with millions of users from around the world that do not speak your language.

I Am Playr is now played in over 200 countries – and it goes without saying that it’s more fun to play a game (or use any product) that is in your native language. So when we saw that we had hundreds of thousands of users in countries such as Turkey, Brazil and Argentina – we had to follow suit.

So we localised the game into three languages (Spanish, Portuguese and Turkish) – and the results surprised even us.

Not only did we see a huge increase in users from these regions, but revenues from these areas increased massively! Learning: For people to take out to take out their credit card – it needs to be in a language they’re familiar with.

Sounds so bloody obvious typing this, but we never realised how much of an impact this could have.

Takeaway: Look where your users are from your data – move quickly to localise in countries that show early adoption

How does this happen? This wonderful thing call Open Graph – as you play games (or interact with apps that request a Facebook permission called publish_actions), certain things users do can get automatically shared to their feed.

You know when you see what your friends are listening to on Spotify? That’s Open Graph.

Anyone that clicks on any of these messages are brought directly to your app (and they do, in their thousands).

Best thing is – once you ask for the right permissions when users installs your app, and you have Open Graph set up – it runs automatically in the background.

As Open Graph is still pretty new (Facebook just full launched it a few months ago) – it’s still a bit Wild West like & there are still opportunities for massive growth for companies who are doing this right.

If you asked me what 1 way could lead to rapid growth in viral installs? I’d say Open Graph.

Takeaway: If you’re linked to Facebook in any way – implement Open Graph now.

There is a healthy eco-system of games on the web – games companies know that most users play a number of different games over the course of an average week. Hence the word – Casual Games, as you can pop in and out of them quickly (of course the games try to get you hooked once you’re ‘in’)

Click sharing networks such as Appplifer or MauDau work by games placing their cross promo bars somewhere on their game. Every time a user clicks on an ad on the bar, the game owner receives a ‘click credit’ and they receive a reciprocal click from a user somewhere on the game network.

And don’t be fooled into thinking not many people click these bars – we recently received over 30,000 clicks in 3 days from one of these bars. They’re clicks & users that we didn’t pay a penny for.

Of course having too much of this kind of thing can negatively impact your game’s retention rate (sending too man users away from your game) – but if done in moderation – they’re usually a powerful way of getting new users. And better to get a reward (a reciprocal click) for someone clicking an ad, than none – which happens if someone clicks a Facebook ads when playing your game.

Makes me think – what other industries would this model work for?

Takeaway: Implement a cross-promo bar – track number installs you get and monitor if retention rate drops

Just like on Google – people search for stuff on Facebook/App Store etc, however these sites are not search engines – so they’re search algorithms are more basic than the Google’s of the world

Meaning you have to spell it out for them.

Meaning SEO 101 – know the keywords relevant for your game and use them often everywhere you can (without it sounding unnatural) – think name, tagline, supporting description, meta data (if you can add it)

Go to Facebook and type in ‘Play Now’ into the search bar – how do you think the top result got its 130,000 Monthly Active Users?

Being smart here and thinking ahead when you’re naming your product can pay dividends.

Takeaway – Do Keyword Research, know your keywords and implement them strategically

Your Turn: Know any other marketing techniques that have worked really well for you? Share them in the comments below