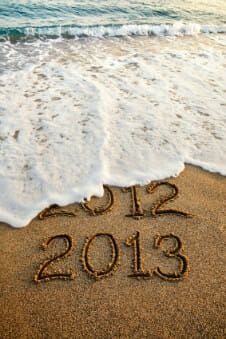 I’ve been an avid goal setter for years – and I believe it’s one of the most important things that a successful person can do. In this post I’ll share my goals for the year ahead – and review how I did on my goals for last year.

Why do I bother?

It was just over a year ago I sat here making goals and plans for 2012. I knew it was going to be a big year for me, and as an avid goal setter – I set goals that would make 2012 a year I achieved more than any other.

Well, how did I do?  Reviewing my goals:

I did post 2 articles a week for a while, and one of my articles got onto the front of Hacker News – resulting in this site crashing due to too much inbound traffic. An interesting experience.

But I’ve just been too goddamn busy with my new startup to post twice a week, which leads me niely onto the next goal I set…..

Goal 2: Be running my own Startup

In September last year I quit my job as Head of Marketing for a very cool Social Gaming startup, to co-found my own startup. I write this as co-founder of a very exciting startup that has just gone through a startup accelerator, has raised some investment and is about to close it’s first significant funding round. It’s been all consuming, but great so far 🙂

So I smashed through most of my college debt this year – but haven’t quite cleared it yet. So defo carrying this forward to 2013!

Goal 4: Do more with less

Ok on refection this was a bit of a fluffy goal. I wanted to make better use of my time with clearer focus and be more thoughtful to people around me.

Main thing I learnt is that I believe can only be really great at one thing at a time. Which takes focus. Hence why we’re doing great with the startup – but things like this blog has suffered a little.

I wanted to learn to swim well – I totally flunked this and I still swim like a brick. Carrying forward to 2013!

Completed a few courses on Codeacademy, but didn’t continue. I’d like to learn this sometime – but I just don’t see this as a priority right now. Will come back to this sometime.

Goal 7: Speak at a Conference

Spoke at quite a few event, and was the lead organizer and speaker at Startup Weekend in Newcastle, which was a great success & I’ve started teaching for the first time in General Assembly, which is cool.

I really learnt that, to do achieve something hard –you need to give it your full 150% focus. So although I didn’t achieve some things on my list (blogging, swimming etc) – I achieved the most important one: my startup.

As you know, last year I quit my job and co-founded a new startup. We’re launching in early 2013 and making the successful and profitable is my no.1 goal for the next year.

Hard work ahead, but it’s going to lots of fun 🙂

Last year I failed in my attempt to learn how to swim well (I’m a sinker at the mo 😉 – this is the year. I run marathons, cycle hundreds of miles & play almost every other sport but I suck at swimming! This must be changed! And will do so by swimming 50 lengths of front crawl by the end of the year.

Yes – Still paying off my college loans, I managed to pay back over £20k last year which I think is pretty impressive. I’m so damn close to having these all paid off, and when I do I’ll feel like the richest guy in town J

That’s it – 3 goals, a lot fewer goals than last year when I had 7 – but super focused. Looking forward to what the year will bring!

Your Turn: What are your goals for 2013? Share them in the comments below!